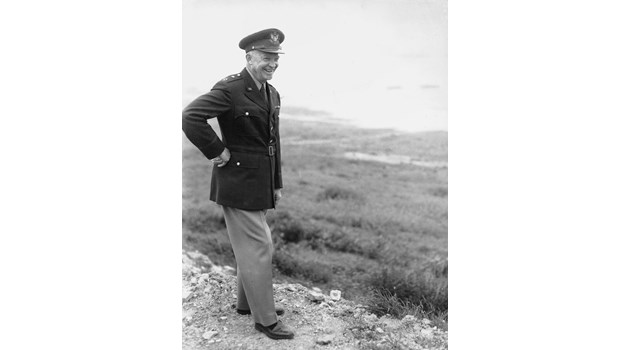 Nicci Eisenhower is currently part of an international group of scientists called "Plan B". She is President and cofounder of American Initiatives for Military Support.

- Can you tell some interesting stories related to your famous family?

- Well, the ‘famous’ Eisenhower family tree has many branches, but three main ones. Of course, General David Dwight Eisenhower’s iconic service as the Supreme Allied Commander of the Expeditionary Forces in Europe and American president made his branch the famous one. In 1741, Ike’s 3rd great-grandfather arrived in America aboard the ‘Europa’ with Johann, one of his ‘Three Sons’. Looking at their family lineage, which I’ll call the ‘Johann Branch’, on the photograph it seems as though a second brother, Jacob Frederick arrived with his wife and founded their family line. And then, there’s a lonely name there: ‘Frederick’. Confusing.

More confusing still, the story all of us Eisenhauers seem to tell is of the “Three Brothers who came over from Germany at three different times…” However, in Germany, there were more Frederick Eisenhauers yet to come. But which one is my ancestor, Freidrich August Eisenhauer? Is that lonely Frederick on the Eisenhower Family tree my ancestor? Or was there one still back in Germany waiting to become the founder of the ‘August Branch’ in America?

- Have you discussed in the family the information that Eisenhower was in contact with an alien civilization? What do you know about that?

- This is an interesting question! Since you asked it, I’ve been searching Ancestry.com for the mysterious “Three Brothers” storyline. In the ‘August branch’, quite a handful of us have unusually strong invisible and intuitive bonds to each other. We also experience this often with loved ones who have passed away. I don’t think we have our experiences in precisely the same manners, but it’s remarkable nonetheless. However, there’s a reason why my personal inclusion in these special connections is surprising.

Also, several of us have very spiritual, but not traditionally religious, relationships with ‘God.’ Our philosophies sound quite similar to the way, prior to choosing a church in his first year as President, young Eisenhower described his own very deep faith. The world knows the famous Eisenhowers ‘by name’: Ike, of course; Ike and Mamie’s son John the Army brigadier general and historian; John’s children David the quintessential historian and his sister Susan, the NASA scientist… whose daughter is yet another brilliant scientific mind.

A friend of mine follows the work of Ike’s great grand-daughter, the well-known spiritual and empathic healer, Laura Eisenhower. My friend insisted that Laura and I seemed so similar in our thoughts and philosophies that I must watch some interviews with Laura and look into her projects. It’s strange when someone who knows you well likens you to another person whom you know not at all. It’s even more strange if you actually find yourself amazed to agree.

Indeed, I was stunned by how consistent Laura’s energy is with my August Branch cousins. And this all fits loosely enough with modern-day medical sensibilities — if you can call it that — because, genetically, they’re all blood-relatives.

However, I have no ‘genetic link’ — whatsoever — to any of the Eisenhauers at all; none that we know about, anyway. You see, my step-Dad, William Eisenhauer, adopted me when he married my mother. My new birth certificate says ‘Nicole Marie ‘Eisenhauer.’

So, here’s something unexpected: ‘Johann Nicol Eisenhauer’, according to the David and Ida Eisenhower wedding photo would be Laura Eisenhower’s 4th great grandfather. While quite confusing, labelled “3” is Frederick Eisenhower all alone. Freidrich Jacob Eisenhauer’s wife, Elisabeth died in Germany, so he travelled alone at age 83 on a ship called “Fulda” and died the following year. His one remaining son, Freidrich August Eisenhauer, arrived in America after his death.

It appears that my ‘famous Eisenhower’ cousin Laura and I share our 5th great-grandfather. And even though I’m adopted, I’m practically named after my 4th great-uncle ‘Johann Nicol’. That’s more than a little bit strange. I recently connected with Laura and perhaps, since we are both in the healing arts we have a God-given healing mission — or one assigned by extraterrestrials — together?

I have not seen the UFO myself, but I can say with certainty that we aren’t alone in the Universe. Some UFOs are likely visitors and some are perhaps military covert operations aircraft.

- You are very involved with military veterans. What is the reason?

You ask tough questions, Petya! I remember being quite young and sitting for hours with a hardbound book, an expansive outline of the Eisenhauer family in America — it’s a huge, family, actually. The book connected all our links to Ike. He was really the one man who made a nation — and a globe — feel safer following World War II. While I can see it clearly in my mind's eye, the book has since been misplaced. I hadn’t given it a second thought until, by happenstance, through military advocacy work — I met our present-day Brigadier General James P. Isenhower, III.

The first thing BG Isenhower said to me was, “We're related, you know?” I believed I did know, but I let him tell the story, instead. He started with the exact words we all seem to say: “Three brothers came over from Germany at three different times. Somehow, they ended up with three different spellings…” I laughed. He also referenced that old book I cannot locate anyplace.

Here we are — All Three Branches.

Is this related to the past of your famous family?

So, as you can see, while there’s military service in all branches of the family, our Service members were ‘non-famous ones’ and one declassified.

On my mother’s side, my great Uncle Adolph had just emigrated from Austria to America, and fought in Japan in WWII. I have kept the letters Uncle Adolph sent home to my grandfather. I highly doubt it was General Eisenhower who decided it was best to send a guy named ‘Adolph' with a German accent to the Eastern front; he’d have been viewed as a very untalented spy otherwise, I think! He did make it back to the States, too.

My grandfather was physically unable to serve, and I believe that was his life’s deepest regret. It was many years after he passed away and I had spoken with other non-Veterans of his era that I came to better understand. He gave confusing explanations for why he didn’t serve, like “I had flat feet.” (No, he didn’t, and he wasn’t prone to white lies, either!)

I’ve since learned that many Americans who, for whatever reasons, didn’t serve in military conflicts have a rarely-expressed sense of guilt or regret. As it is for our Allies, American military service is highly-honoured. However, I’m embarrassed how we treated our Korea, Vietnam Veterans and how little progress we have made understanding the illnesses and injuries — both physical and moral wounds — inflicted during conflicts ever since. Perhaps I have a feeling that I might have served, too.

Definitely, my involvement in military medicine is inspired by family service — and loss. My second cousin, Captain David Mehlhop, United States Air Force, didn’t come home following the crash of his Spectre gunship aircraft supporting the Somalia Operation called “Restore Hope.” David’s Dad was a West Point graduate who became an Army physician. My cousin Commander (Ret) Jeff O’Donnell, US Navy was a submarine nuclear physicist who contributed to a scientific breakthrough I cannot begin to explain. And my dad served in the Marine Corps on the USS Thetis Bay, a Casablanca class aircraft carrier (a fancy way of describing a tanker converted into a helicopter carrier) during the Cuban Missile Crisis.

The service of the men in my family, especially my family members’ loss of David, is, of course, deeply meaningful to me. His mission was classified and so the events surrounding his loss perplexed the family for many years. These are things that most citizens never think about when it comes to the service a military family offers. This was something that I admired so deeply about Ike and Mamie Eisenhower. They were devoted to the military family experience in a way I do not believe we’ve seen the likes of since. They even created a home for war widows and orphans called Army Distaff Hall in Washington, DC.

On reflection, I suppose it’s in that same spirit — my own relationships as what today we call a “milso" or “military significant other" — set me on this journey. My own friendships with Women Veterans and their unique experiences, too. I never expected to cofound American Initiatives for Military Support (AIMS). Like so many things in life, it just happened. One of the deployments was extremely difficult for both my boyfriend and myself. It destroyed our relationship and negatively impacted both of our physical and mental health terribly. It took a terrible toll on his son and his family, too.

How he recuperated, I do not know. Throughout my own life, how I’ve recuperated — and continue to recuperate — is to search for answers.

I submerged myself into working with my cofounders on gathering professionals in mental health and neuroscience; assessing the overall landscape and logistics of delivery of care. Thank God for the amazing professionals I’ve come to know. They saved my life — and they’ve made it possible to address COVID-19 in ways that align with methods the Source of all that is good designed for us.

- How did your interest in healthcare start, looking for innovative ways to help patient populations?

- My interest in medicine has been life-long, really. My dad has always been very much into fitness and what we now call ‘preventive' or sometimes ‘alternative’ medicine. Many years ago, he was a bodybuilder and he would sometimes work out with Lou Ferrigno the actor who became famous playing the green monster everyone knows as The Incredible Hulk. Yes, we compared my Dad to the Hulk and we also joked mercilessly about all his vitamins and supplements piled by his plate at the dinner table.

Guess who has piles of supplements, now, too?! My Dad did many things right where it came to health — things we think are such epiphanies today, that we endlessly research to quantify what should be so much simpler. This line of thinking is a great segue for the COVID-19 questions you have for me. Because COVID-19 is a whole lot simpler — and a whole lot more complex, too — than the way the public and even science perceives it. So? COVID-19 Plan B!